“Maybe since January lasted for seven and a half years, February will be easy,” I said to my friend Kris. She was doubtful since February, for us and many others we know, tends to be the longest and hardest month. Never mind the 28 days of it, February is notorious for slipping the bonds of time dragging us into a morass of sadness and fatigue, dying and death.

So far so good, I told myself a week ago, but I rationalized too soon. In recent days, we got the news that one of our dearest friends is going on hospice, and the anticipatory grief and very current despair about the rapid meanness of his cancer trips me from laughing to crying on a dime, especially for wife who loves him so utterly. An old friend I haven’t seen in over a decade died suddenly two days ago. Ken’s wonderful dad died on Feb. 10th in 2009, and a year early, our good friend expert pie maker Weedle died on Feb. 12th.

That’s just us, and I know many close ones who have their own string of February impossible losses and big swaths of grief. It makes me wonder, if we have some say over when we give up the ghost, whether the bitter dregs of winter have anything to do with it. February also tends to be when the worst ice storms or blizzards hit, seemingly out of the blue, but maybe it just feels like that by this time of the year. It’s been cold too long, even with global warming and some surprise 60-degree days, yet spring seems far off.

February is the squeaky door that doesn’t close properly between love and grief in real time. It’s a time of year when I see up close how much deep and unconditional love we’re capable of, despite what we believe of ourselves. A friend just posted on Facebook how caring for her dying husband is stretching her to her seeming limit only to realize she can stretch further. Another friend texted me, “How do we bear the unbearable?” and then a photo of her beloved’s face full of joy as his childhood friend kissed him on the forehead.

We get through the unbearable together. We stretch ourselves in inconceivable ways. We stand on the threshold of February looking back and looking forward but mostly just looking at what we can see here. Like yesterday, while taking out the compost in the hard chill of the air, when I noticed the first crocus, papery and white, blowing hard in the wind but staying intact low to the ground. Like February, especially this year.

The starlings grabbed my attention while I was pacing the living room on a phone call. They poured diagonally down to the lawn, fanning out to bop and dip on the winter grass, then swooshed around to thread through the branches of Cottonwood Mel on their way to the bare mulberry branches. Meanwhile, a dozen or so fluffed-out-to-maximum-roundness robins rock on the branches of the cedar tree outside the kitchen window. When I return to the bedroom, it’s chickadees and junos all the way on our deck railing because of the bird seed I just poured there after filling up the feeder, emptied in record time this morning.

There’s nothing like winter birds around here — the dizzying numbers of them emerging when the temperature drops and the wind pauses or picks up again, scattering them high into the trees or across the horizon until they return again. Everyone is fluffed out to perfection, whether the flicker wedded to the side of the cottonwood or the singular sparrow perched on the clothesline. Some days the blue jays rush in, bullying away the regular residents of our backyard, and usually by mid-February, the bluebirds return, dazzling me beyond measure. The cardinals float like candles in the tall stand of cedars, and the red-winged blackbirds flash fire as they go. One barred owl sways on top of a bare tree each late afternoon

Working at home, I have the advantage of being in a ready-made blind, hidden from them by edges of window frames enough at times that they get close. I also have a bird alarm system through the cats although they get worn out by so many hours of high-definition Cat TV that they fall asleep just a few feet away from all that landing and tweeting. At the same time, it’s hard to work when so many flocks power past with the promise of returning on the other side of their swirl. But the older I get, the more I realize there’s little more important in this computer screen than what’s taking off and coming back into view in the world up close and personal, one window at a time. 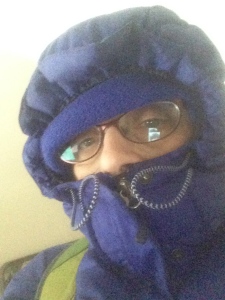 That’s why I’m inside all day and night as much as possible. In Vermont these days, it’s officially wicked cold with a high of zero yesterday, and tomorrow big winds rushing 50mph in to splash the super cold all over us. Unlike my life in Kansas, where heading outside, even staying a while during this crazily mild winter, is a thing of beauty, here’s it’s gorgeous, freezing and deadly. We’ve been told by the college to not walk alone because of wildly low wind chills predicted.

Meanwhile, there is the need to get from Point A to Point B, which required vast planning and exact execution of many layers of clothing, from Cuddle Duds to outer layers of down. Getting dressed is serious business that entails wool socks under other thick socks, and the covering up of as much of the face as possible with hat, scarf and hood. 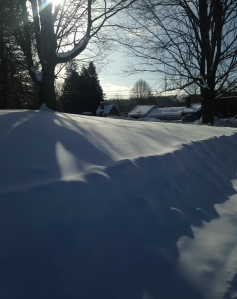 Then there is the step outside, which usually feels anti-climatic. “Oh, this isn’t so bad,” I think to myself for the first ten steps. Then I take the eleventh step, and I no longer think such thoughts because my legs, even in their layers, are freezing as is my nose, knees and arms. The snow and sky shines or shades itself in its loveliness while I move as fast I can in so many pounds of clothing. Then there’s a distant, then closer, doorway to enter a building and the heavy fogging of eyeglasses ensues. “Oh, it’s you,” people tend to say when I start zipping myself out, but since I can’t see them either, this works out.

From then on, there’s no running back to the dorm for a cat nap because it’s too darn cold (naps must be taken instead on my office floor). I plan my day with minimum exposure to windows or doors and maximum exposure to carbs, grease, meat, and hot tea.

Finally, when it’s time to return, I walk back bundled up and amazed at how cold my eyeballs are and, at the same time, how the new snow pouring down makes such extremes shimmer its old light to guide me home.

The sky looks angry, and for good reason. Winter, on route to us since December, got mighty lost on the way and ended up in Budapest by mistake. After many planes, trains and automobiles, she was probably too wiped out to go on to her full destiny/destination. No wonder it’s been in the 40s and 50s (even the 60s) so often this January and February.

All that is about to change. Winter’s coming, and she’s none-too-happy about the delay. Snow — maybe just a smattering, followed by some freezing rain is on its way.

Of course, the snow is supposed to turn to ice at the same time my plane is supposed to leave, but that’s buy cialis by the pill tomorrow. For today, I’ve prepared: I drank a mug of hot cocoa, took a hot bath with eucalyptus salts, dressed myself entirely in fleece (seriously although I didn’t have fleece underwear), and threw some chicken and vegetable in the Schlemmertopf to make us a winter-accommodating feast in 60-90 minutes.

Looking over the edge of this computer to see my purple-fleece-covered toes, and behind them, the cat asleep on the down comforter, I feel very fortunate, and I can only wish others in the path of oncoming winter are adorned in, surrounded with and soon to fed by warmth and light.

As my friend and good writer Cheryl Unruh wrote, “The warmth that has lingered in September and October gave Kansans a second chance at summer. (Because the first summer was pretty much unusable.)” To say our summer was unusable is true as rain, which, incidentally, we didn’t get much of either.

Fall was payback time though: we’ve had two months of gorgeouso weather: lingering warm days, muted but long-holding leaves in autumnal tones, cool evenings, and lively warm winds just when we needed them. The sky has been largely been bright blue, the temperature usually between 55-80 each day, and the pumpkins happy next to bunches of mums all over town.

That’s why it was such a shock when the temperature plummeted, the long-forgotten rain came, icy in its edges, and Holy Batma!n, even the power went out. Having slept outside again last night — easy with the futon bed, screened-in porch, cat on top of me and dog beside me — I was jarred to discover that last night’s low turned out to be as warm as it would be this day. As the hours unfolded, the mercury dropped, and the walk back to the car mid-afternoon was a different cialis generic online from canada reality than the walk from the car mid-morning. Then the drive to town in high winds and sidewalks gulps of rain. Then the return home, first to my mother-in-law’s home where I found her and my son sitting on the couch, by candlelight, wrapped in blankets. Now the return of light and warmth while outside the reality of winter winks at us through the window, saying something like, “Look who’s back in town, baby!”

“I’m ready for some snow, just a smidgen,” my friend Kris said today as we tried to make our way through too much fish and chips at Free State Brewery (what sensible people eat when the weather takes a sharp turn for the arctic). “You’re going to get your wish,” I told her, then updated her on the weather report that called for a dusting.

So yes, the utter shock of winter, but at the same time, it’s all such a novelty at the moment that all the down or quilted garments and blankets are objects of charm and purpose today, and the sound of furnace kicking on is a kind of calming music.