On Saturday, we scattered the ashes of Jerry, called the “cremains,” on the prairie with family and close friends. Gathering mid-day on the Akin Prairie — a place Jerry loved intensely — we followed the Kansas Area Watershed (KAW) Council water ritual that Jerry had participated in dozens of times over dozens of years. This ritual, which ends most of our KAW Council gatherings — whether on the prairie Camp Hammond (between Lawrence and Topeka), where we’ve held weekend gatherings every spring since 1982, or beside Castle Rock in Western Kansas or other places we’ve explored — is a way to honor where we’ve traveled, where we’re going, and most of all, where we are. We stand in a circle, begin with chanting three Kaws (kind of like om but to the tune of Kaw), and then each person, as he or she feels moved, can step into the center and offer up a prayer, song, gesture, poem, memory or wish. 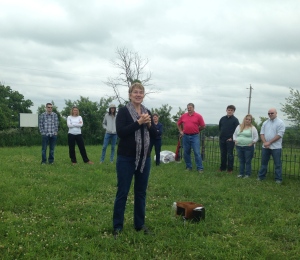 Along with what people say or do, we invite everyone to bring water from their travels to pour into the center, and this time, we had the water from Jerry’s travels. Danny found several bottles with water that Jerry had collected from the Southwest, his home state of Minnesota, and within and beyond Kansas. His daughters brought a box containing baggies of his cremains we could scatter right in the center, out in the prairie, or in other places.

The skies danced panoramic of storms to come, and the prairie was alive with blossom and sharply-green grasses. Jerry’s family, superb at both speaking from the heart and self-organizing, instantly started coming into the center, from the oldest to youngest siblings and their families, then his oldest to youngest daughters and their families. Then friends and other family member stepped into the center. One sister invited us to turn to the person next to us and dance for a moment since she had promised Jerry they would go dancing soon when he took a short-lived turn for the better in the final days in the hospital. One of his daughters asked us to open up our arms to the sky as she had seen her father do countless time. Some people told stories, like how he attached a camera to a kite, bringing together two of his passions, to get some aerial photos. One friend sang out the word that speaks to her most of Jerry: sweet.

At the end, many of us scattered ourselves through the prairie to leave some of his ashes or say our own goodbyes. I didn’t realize how incomplete his leaving was last December until I watched his family and friends fan out across the luscious green and blooming prairie, and earlier, right at the end of the circle, how we all called out, “Jerry on the Prairie!” This is where he is, and he’s also right here with us, alive in the stories we told later at the Unitarian Fellowship for a celebration of his life and spirit, the next day on our porch that he built, and for many days to come.

Jerry loved the wind, and as I write this, back on the porch, I’m surrounded by wind, birdsong, frogs are chirping, and one owl just called out, just like the one owl we heard while in the water ritual circle on Saturday, singing to us despite it being the middle of the day. We’re now in the after of Jerry on the prairie, landed in beauty, loss, sweetness, and something beyond mere knowledge that my friend Kat Green wrote so perfectly about in this poem:

Sometimes knowledge is not enough.

Nor is knowing in your bones.

We make our choices.

We live or die.

The crest of a hill by the Aiken family cemetery

but not in it.

We encircled his large family with unfamiliar ritual,

his ashes in the center.

They looked a little uncomfortable.

But then we began the water ritual.

Dan had found a bottle of water

Jerry had collected on his travels

throughout the Great Plains:

The Texas gulf and other places.

We took turns stepping into the center.

We spoke from our hearts

took a little of his ashes

and poured a little of the water.

His brothers and sisters stepped into

the circle with their families

from oldest to youngest.

Did I mention many of them wore cameras?

His daughters and their families spoke next.

We remembered a stubborn, kind man

and exquisite photographs of the natural world.

We surged into the center of the circle and back

I believe in giving gifts whenever the spirit moves us as well as giving ourselves whatever gifts feed our souls and lift us up to live out our callings. In this tune, I want to recommend these possibilities for you to give others and/or give yourself, all of which are home-grown (benefiting the 99% and not just the 1%) and offered by people I believe in.