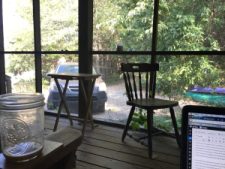 I’m perched on this lovely porch on the last day of the year, at least the last day according to the Jewish year, which ends at sundown. The wind and crickets thread sound through the Osage Orange tree, leaning over the driveway with its heavy hedge apples (think lime green brains the size of grapefruit). A few hummingbirds dive-bomb each other on the aerial path to the feeder. I’m comfortable in a hideous chartreuse recliner with iced coffee within reach. It’s just another beautiful edge-of-summer day in Kansas for me, but for many it’s far more heartbreaking and threatening.

I think of people in central Mexico, working frantically to unearth possible survivors from collapsed buildings from the 7.1 earthquake yesterday. I’ve watched videos of people coming together in the streets, crying in each other’s arms, or staring at buildings that have sloughed off into big piles of concrete and steel.

I think of thousands in Puerto Rico, right now, enduring Hurricane Maria, which hit the island as a category 4 hurricane with sustained winds of 155 mph. I imagine the terror so many must feel right now as the winds batter their homes or shelters, bending palm trees horizontal and tossing cars across flooding parking lots. At the very least, they might be worried about having enough water and food, knowing how likely it is that they could face weeks or longer without electricity; at the most, their lives might be danger because of storm surges, crumbling buildings, and mud slides.

I think of millions in South Korea, North Korea, Japan, Guam, and many other places living with the searing threat of nuclear attack due to two immature and reckless leaders, one in North Korea and one in America, talking trash about the other and escalating a historic conflict. With rhetoric about destroying these countries and many more, those within easy reach of missiles bearing nuclear warheads must be living with overwhelming fear as the war of words builds.

Meanwhile, the fires in the west burn millions of acres of forest and change the faces of many a gorge, valley, and mountain. Ethnic cleansing in Myanmar has led to hundreds of villages being burned to the ground. People throughout various chains of islands and many on our mainland are still without electricity, or are busy with the sad work of stripping out of their homes all the water-logged furniture and family treasures.

Fire, flooding, earthquakes, hurricanes (Harvey, Irma, Maria), and war rage on, sporadically or worse, and much of it (excluding the earthquakes) due to the worst of human behavior: ignoring or denying the effects of climate change, and escalating the conflicts between tribes or nations to the point of no return.

It’s the end of the world as they know it for so many, human and otherwise. It’s also, as seems to have been the human habit, a time for the best of our beings to come forth. People in Texas made human chain to transfer elderly people out of flooded homes, thousands (or tens of thousands) of people driving to Texas or Florida to help with feeding, clothing, rebuilding, and reconnecting electricity for those in need. People in Mexico worked in the hot sun for hours, then all night, and still continue today lifting shards of concrete, digging with their bare hands, and listening carefully for one trapped beneath. I think of my brother-in-law in Florida, an electrician, who has worked long hours in the heat along with countless others to restore power for many communities. I marvel at the photos of humans throughout the Caribbean and Bahamas who lost everything, but also gave every ounce of their energy to rescuing others. A cruise ship ended its trip early, giving passengers the option of staying on to help evacuate islands in the path of Hurricane Irma, and over 70 vacationers did just that along with many cruise lines that sent ships and cash to the islands. Firefighters in Montana, Oregon, Washington, and other states worked themselves to exhaustion doing dangerous work to save lives and places.

At sunset, we cross over into the new year, but millions around the world have been forced to do this already, leaving behind all that was lost in the old year. For them, and for the blessings we can be when we reach out to help those facing the end of their worlds, my deepest wish is that we find hope in action that shows us what we’re capable of. Let us mend what’s broken, lift who and what is fallen, and act always on a love for life, and all that being and staying alive entails. L’shanah Tovah — a good and sweet new year — for everyone.

Truth to Power: Read & Write Poetry of Change
Self-paced in your own home or travels
Poetry Playhouse
Online and Zoom
Will Create For Love & Money with Kathryn Lorenzen & Caryn Mirriam-Goldberg
Zoom
Your Right Livelihood -- The Class
Zoom, online, and one-on-one phone calls or Zoom
Sign up for a free guide on refreshing your work-life balance at http://yourrightlivelihood.com
Changing the World with Words: Transformative Language Arts Foundations
Online and Zoom
END_OF_DOCUMENT_TOKEN_TO_BE_REPLACED
%d bloggers like this: