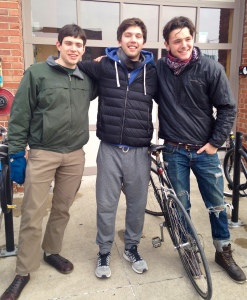 “In 40 years, I’ll take my kids to Amherst, and walk them around with my old friends and their kids like we’re doing today,” Adin said after we did just that in Columbia, MO.

Columbia was where we met in college, or more to the point, because of what we did in our many non-college hours: potlucks with too much carob (what were we thinking?), romantic romps deep in the fields of experimentation, and protests calling for divestment in South Africa by yelling “The People! United! Will never be defeated” until we retired to another carob-warped potluck to sing Holly Near’s “It Could Have Been Me.” There was a lot of loud Rolling Stones or Supertramp music in between analyzing the socio-economic biases in Mary Popins’ “Let Go Fly a Kite,” and passionate debates about anarchism, social democracy, feminism, how we could save the labor movement, and why poetry, drumming, and organic zucchini could redeem the world. 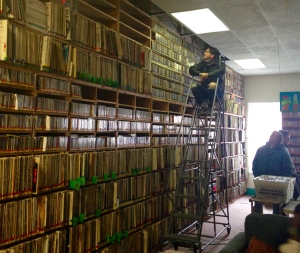 Sometime in the early 1980s, some of us left. I headed west to start as a reporter for a Kansas City labor newspaper before making my way to Lawrence to marry and have a litter of kids, Suzanne went to Vermont to work for Goddard College and raise a good son, and others scattered to Africa or Boulder, Minneapolis or Kingdom City, MO. Our friend John stayed, worked, raised two beautiful sons. Add in 30 years, and here we are – John, Suzanne and me — with some of our offspring, hitting the streets of Columbia to visit and revisit our old romping grounds with the new generation.

We lunched in a place new to some of us, passing around bites of potato knishes and thai ceasar salad. We tore up the stairs to KOPN commnunity radio, the station where all of us oldsters produced various radio shows back in the day (mine was “Saturday’s Child…..Must Work for a Living,” a Democratic Socialist show), and where we could now thrill in how NOTHING had actually changed (except for piles of CDS along with all the thousands of albums). We introduced our kids to the six columns from the old University of Missouri main building, all that was left after an ancient fire, and said to correlate to the number of virgins left on campus.

Mostly, we talked, catching up on old friends and watching our sons talk — all of whom have vivid and cross-pollinating interests in everything from ecological restoration to Buddhism to cultural concepts of the mind to what kind of revolution or evolution it would take to fix our broken politics. The boys, well, actually men, ranging from 18-26, were the same ages we were when we met, danced all night or rode our bikes in the rain. But they generated same kind of spirit, questions, and sparks we did at this age and still do, I hope.

There’s a lot to consider in terms of what actually has changed in 30+ plus years, most notably the climate, and much else that has gone to the big dogs, such as the corporatism we deconstructed over late-night explorations of new herbal tea blends 36 years ago. If anyone in our crowd even mentioned gay marriage, we would have been sure they were on drugs, but then again, reality isn’t always a strong suit for people eating ice cream at 3 a.m. on the lawn of the local V.A. hospital or asleep all day when they should be in classes (okay, so I speak for myself here).

What is real was this day when we got to walk across and wander along the edges of the bridge between generations, springing up in this place where we watched our kids exchange emails and cell phone numbers, promising to continue their conversations in their present or future places. I love the vision of them leading their kids past old bars, new eateries and well-worn paths where they met their oldest friends.