There was a moment in 1981 when I was driving from Columbia, Missouri to Kansas City, where I had just gotten fired from my first job out of college, crying so hard that I could hardly see the road. My friend had given me a key to the now-gone anarchist house, where I vowed I would move as soon as I packed up my KC apartment. As she gave me the key, she said, “You’re not coming back.” I told her she was wrong, but as I was driving and crying, I realized she was right although I couldn’t say why. Sometimes a single moment, informed by a compulsion that doesn’t make sense, can change your life just in the way coming to Columbia in the first place changed mine.

In 1979, having mostly finished a community college degree, I got on a plane with my friend Kathy, our combined 11 pieces of luggage, and no idea where I was going. Having grown up in Brooklyn and New Jersey, I didn’t know from the Midwest. Over 17 hours later — a blizzard, several delays, a flight to St. Louis, and a long bus ride in the middle of the night — I arrived in Columbia. It was dark, the streets were piled high with fresh snow, and it was crazy cold.

I didn’t know then that when I woke up, the next day and many others to come, that I was waking up to a very different direction for my life than what my 19-year-old mind had diligently planned (get journalism degree, return to NJ, live near the beach, be reporter, marry boyfriend, write poetry). In fact, the only part of the equation that stuck was the poetry.

What Columbia gave me, most of all, was gumption. I learned — by necessity at breakneck speed after my father retroactively cut off my college tuition — how to support myself and aim toward where I was led rather than the conventional wisdom at the time (as in, “Write poetry? Better become a journalist”). During my two and half years there, I worked as a Dairy Queen parfait maker and floor scrubber, movie theater concessions pusher, mom-and-pop store cashier, reader for a legally blind woman, and night-shift newspaper shuffler (catching newspapers off the conveyor belt, and shuffling their sections together).

I also worked somewhat at school although I didn’t make going to all my classes the habit it should have been. After my meeting a diet-coke-swizzling mentor, historian Dave Thelen, who told me, “You don’t belong in journalism school. They’ll ruin you!”, I added history as a second major, which became my only major after the J-school booted me out. Mostly, I majored in grassroots organizing, working with labor-friendly student groups with silly plans (“let’s organize all the secretaries on campus!”) but earnest intentions. What I was learning about broadcasting and newspaper writing in my journalism classes was very helpful for making flyers, press releases, and even, on fabled (and still going strong) community radio station KOPN, doing a socialist radio show, “Saturday’s Children (Must Work for a Living)” with the now-editor of In These Times (our theme song was “Let’s Go Fly a Kite” from Mary Poppins). Most of my free time was driven by trying to get myself loved in all the wrong ways, attempting to appear cooler than I was, and riding bikes in the rain at night with bunches of anarchists before splitting tubs of ice cream on the lawn of the V.A. hospital.

Columbia was my town, the

place I felt increasingly like myself, and where I wandered at any hour in the night with a sense of freedom and friendliness. As Ken and I walked in the sweltering night (“200% humidity,” I told Ken, who later showed me how it was only 84%), I led us on a treasure hunt to find the places I loved. We stopped at the Heidelberg, where I tried my luck at being cynical with the other J-school students, and also partied with Spyro Gyra after their concert at MU (they were young, we were young). There was the corner where Shakespeare’s Pizza used to be; the now-defunct Chez Coffeehouse, where I volunteered by mixing coffee with hot chocolate for patrons while listening to Papa Joe, aka Joe Newberry; the ancient pin oak I hugged after my friend Gayle died from treatment for leukemia; and the Wilson Street house where I lived with Kathy and six other women (we told people it was the Feel My Thigh sorority), subsisting on Ramen noodles, cheap beer, and potatoes. The next morning, we found the dorm where I lived for six months with a lovely woman from a born-again Christian family, then the bungalow where I lived for a year, badly choosing to make the back sleeping porch my room (no heat in winter, so I ended up spending months on the floor of my roommate Gary’s room). 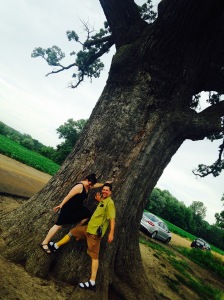 I also found my people in Columbia, and this week, I reunited with three of them: I hadn’t seen John in a mere 26 or so years, and Dave and Steve for over 34 years, but lost time didn’t matter. We ate breakfast burritos, shared orange-apple-grapefruit juice, and reminded each other of “the time that…” and “well, no one wore clothes then” stories in between passing phones around to show off grown kids.

Driving home, I asked myself why I hadn’t been back more, considering Columbia is just a 3-hour drive east, but then again, as with most Kansan-naturalized folks, I’m oriented to heading west. At least, I was until this weekend. Now with plans to reconnect there and go on adventures (“Let’s go to Yosemite! Let’s go see the sandhill crane migration in Nebraska in March! Let’s check out the Flint Hills!”), I’m home — in Lawrence, the other town that changed my life — with an unpacked suitcase and fully-packed heart, ready to return.

Wild East Lawrence Walk - By Podcast
Podcast
Lawrence, KS
Songs & Stories of East Lawrence Book Launch Concert
Cider Gallery, 810 Pennsylvania
Lawrence, KS
Online Class: The Art of Facilitation: Facilitating for Community & Change
Online class you can do from wherever you are!
From Anywhere: Life & Livelihood Small Group Coaching
Video-conference you can do from anywhere
END_OF_DOCUMENT_TOKEN_TO_BE_REPLACED
%d bloggers like this: